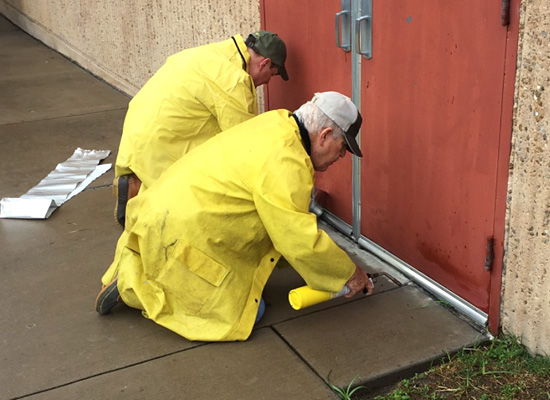 #collectivegreatness
With school back in session and the community in full recovery mode, SBISD’s Facilities and Operations Team are taking time to reflect on how innovative thinking and a proactive approach to facilities planning, combined with a monumental team effort, ensured district schools successfully weathered one of the area’s worst rain events on record.

Innovation is what SBISD’s Director of Facilities, David Vesling, considers critical and often different about his team and their approach to the work.

“We have a decade worth of work history that’s informed our planning and maintenance operations,” said Vesling.  This foundation, along with his team’s openness to learning and innovation are two possible reasons the school district experienced minimal amounts of damage from the recent storm event.

“You have to be able to do critical thinking and reinvent yourself to come up with solutions,” said Vesling. “Three years ago we couldn’t have handled this, but we’ve developed our problem-solving skills. We’re more confident that we can deal with whatever Mother Nature throws at us.”

When faced with Hurricane Harvey, a potential monster rain event, his team’s confidence rested on the innovative application of a solution called Peel and Seal®. The product is traditionally used as a fix for temporary roof patching and repair.

Applying the traditional in a non-traditional way was a game changer against potential water infiltration, and something Vesling and his colleague Jose Galvan had tested successfully against in the year prior.

“We used it before to combat water penetration beyond just roofing application. That success led us to consider and use it as a way to thwart the water threat from Harvey,” said Vesling. Vesling’s team sealed every facility in the school district, substantially raising the bar and providing an additional 6-8 inch barrier against high water.

“I feel Peel and Seal® was one of the reasons we didn’t see water in our buildings. Look at the flooding that happened around the Sherwood and Nottingham Elementary facilities. Even with that amount of water, the buildings remained dry,” said Vesling. Ironically, the only water issues faced by the school district during the storm resulted from of an interior pipe leak at one school.

This non-traditional approach to solving problems is driven by his team's commitment to secure district assets and the community investment. It also is a testament to what SBISD Associate Superintendent of Talent and Operations Jennifer Blaine see’s critical to overall district success.

“I am proud (but not surprised) that they developed an innovative approach to managing this situation,” she said. “You hire the right people and empower them to develop systems and processes that result in incredible outcomes for students and staff. David and his team consistently produce quality results that positively impact the operation of the district.”

Harvey served as a proof point when accessing this belief, the division’s commitment and what some may see as an unconventional approach.

“My heart breaks. I am sitting on conference calls with districts that surround us listening to what they are dealing with. Many are facing massive recovery effort in their schools; they had significant damage to facilities. We don’t. I think part of the reason why was our approach,” said Vesling.

That approach also involved people, lots of them. Over 75 staff members from custodial and maintenance staff worked for two days before the storm to seal every door in the school district. “It didn’t matter what your regular job was. You were part of the team. We had a lot of ground to cover, and we did,” said Vesling.

“We had a protocol for before, during and after the storm event. We sealed the buildings over the course of two days, the Friday and Saturday before the storm. Then, our emergency team captains were assigned to monitor facilities for the duration. We had staff working 24-7,” said Vesling.

They weathered the storm together, out in high-water vehicles constantly monitoring facilities. “We even had folks sleeping in the concession stands at Tully keeping pumps running to ensure we didn’t lose the field,” said Vesling.

“Our Maintenance Manager, Dennis Louvier, and district plumbers, they slept out there during the storm,” said Vesling with a pause.

“We had 11 agencies, 1,700 pieces of rescue equipment, 350 charter buses, and folks from all over the nation there,” said Vesling. Opening the coliseum doors was a true team effort. “It wasn’t just about a building; it was about breakfasts, lunches, shower facilities, technology support and more,” said Vesling. “Our supportive measures are what allowed these first responders to service the Memorial and surrounding areas with the help they needed.”

“Dr. Muri was by my side the entire time. It’s his district, and he was there through everything with us. It meant a lot to our people and me. I think we should be proud of the fact that we came out as we did and that we were able to provide the support we provided.”

Staff members from every division within the school district, converged on the Don Coleman Community Coliseum to offer support. “I made the calls. When I needed towels for folks to shower, I picked up the phone and called Wayne (Shaper, Jr.) in Purchasing. He was here with 300 towels. People stepped up,” said Vesling.

“Think about it, we had to feed rescuers, 400 plus people, and everything was closed. I contacted Chris Kamradt, he got two cooks and he, himself, prepared the meals for all these people. Then, Diana (Freiermuht) and Dee (Benefield) served. All of this during this torrential storm,” said Vesling.

From Food Service to Athletics and Technology, members of the entire SBISD Team pooled staff and resources to provide support for first responders and the community. From Vesling’s perspective, it’s just what you do as a family member.

“We got stuck at Don Coleman, and everyone’s cell phones had no battery, and no one had a single charger. I called Wes Hargrove in Technology Services, and before you knew it, Karen Justl from Educational Technology was there with exactly what we needed,” said Vesling. “For me, this event confirmed what makes our school district and this community great. You saw the character of people. This experience was a confirmation of just how amazing our employees are and why we as a community should be very proud.”

“It appeared to be a well-oiled machine, but behind the scenes, it was truly a wonderful display of collective greatness,” Vesling added.

Listen to what our staff and leaders have to say about the OUTSTANDING work of our employees:

Share to FacebookShare to TwitterShare to LinkedInShare to Email