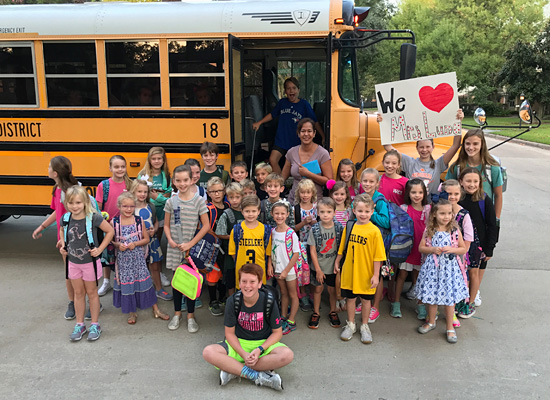 As the sun began to rise on Friday morning, district bus driver Veronica Luna was just another flooded-out homeowner. Her Richmond-area house, which had never flooded before, took on 6 inches of water in Harvey’s deluge several weeks ago.

Her first floor was ruined. The house’s sheetrock removed. She was living on the second floor, like many not sure if FEMA aid would put her house or life back together again.

Then on Friday, several stops into her Wilchester Elementary Bus No. 18 morning route, Mrs. Luna was suddenly greeted by students and adults, a homemade poster reading “We Love Mrs. Luna!” and cash donations that will soon help to start repairing her damaged home.

She is FEMA approved, but quickly learned that assistance alone will not fully replace the floors and sheetrock and paint that were destroyed.

At the first sight of the Wilchester Elementary bus stop gathering, she burst into tears. Beginning on Monday, her students and parents had asked about her home situation. A few had already handed her small gift card donations. This morning’s donation will help her much more. 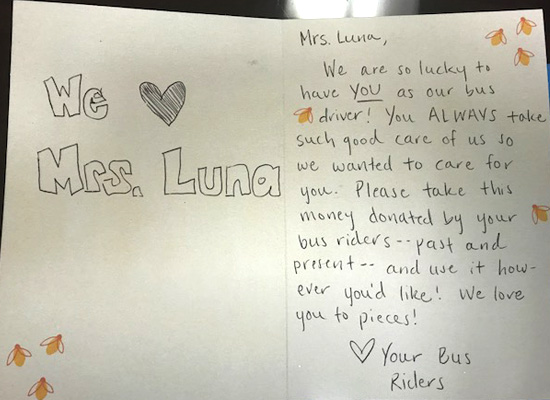 “I feel so special,” said Mrs. Luna, who has driven the Wilchester route for four years. “At that bus stop this morning, I could not stop crying. I feel so blessed. Everyone has shown so much love to me.”

Carrie McKemie, one of several Wilchester Elementary moms who helped query, organize and then make a significant aid donation to Mrs. Luna, said parent concerns ran high in the Wilchester West neighborhood when they learned about the driver’s situation – living up on her second floor and her wait for FEMA aid.

During Harvey, many streets near the bus stop at Southchester and Alchester did flood, but there were no reports of flooded homes there.

“The whole neighborhood came together for Miss Luna,” McKemie said. “I was shocked in a really wonderful way by the generosity that resulted from a simple appeal.”

“She takes such good care of all of us, we wanted to take care of her,” she added.

As for Friday morning tears of joy at the bus stop, driver Luna was not alone, McKemie noted. “We were all crying out there.”

Share to FacebookShare to TwitterShare to LinkedInShare to Email